One Friday evening my son Nick and I had the mighty privilege of watching Nigel Kennedy and his band play Jimi Hendrix. And it was a totally amazing experience.

What especially grabbed me was Nigel himself. Stocky, bawdy, with a bad haircut, wearing a crap old Aston Villa T-shirt, expletives abounding. And so when I Wikipedia-ed Nigel Kennedy, I noticed they too had something to say about his image:

Kennedy’s carefully maintained loutish persona is seen by some as abrasive and limiting to his career, citing as an example his use of a ‘Mockney’ accent. Kennedy was attacked for his approach to classical music by John Drummond in 1991, who criticised his “ludicrous clothes and grotesque, self-invented accent.”

And then he plays. His music is sublime and transfixing. The light and shade of Jimi Hendrix was felt by all present. He is a musical maestro, and when all is said and done isn’t that what it’s all about anyway; the music?!

Some will go for style over substance, and in their eyes Nigel Kennedy might be a half-baked brand. Personally I go for substance over style. There’s just too much ‘style without substance’ floating around these days. And if there is a jarring visual disconnect between the style [loutish persona] and the substance [musical genius] so much the better. After all, it’s the crazy one’s who let the light in. 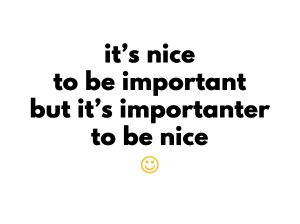 BE NICE TO EMPLOYEES OR THEY WILL LEAVE THE STORY OF THE SAMOAN FISHERMAN